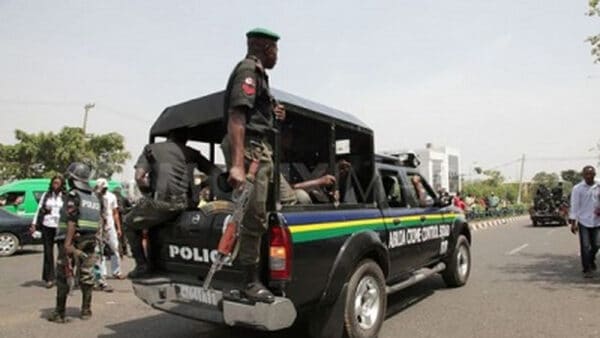 Security men had to result to the use of teargas to disperse rampaging Kano Pillars fans on Sunday at the Ahmadu Bello Stadium in Kaduna.
This was after their team defeated Niger Tornadoes 4-3 on penalty kicks after a goalless draw during regulation time of the men’s competition final match of the 2019 Aiteo Cup.
But there were many after-effects, with dignitaries present for the match having to take cover as the effect of the teargas created a state of pandemonium.
Those affected include the Kano State Governor, Abdullahi Ganduje, and the deputy governors of Niger (Muhammed Ketso), Kano State (Nasiru Gawuna) and Nasarawa State (Emmanuel Akabe).
There were many other dignitaries affected by the teargas, as well as an unidentified player who was driven away in an ambulance and several fans who passed out.
The Permanent Secretary of the Federal Ministry of Youths and Sports Development, Olusade Adesola, even had the windscreen of one of his official cars damaged during the melee.
NAN reports that it had all started immediately after the match had ended and Kano Pillars fans broke the barricade to enter the pitch in an attempt to celebrate with their players.
In the attempt to stop them and prevent them from disrupting the trophies’ presentation ceremony, the fans clashed with the security men.
But inappropriate crowd control measures, which included manhandling and the use of sticks by members of the local security group, saw the Kano Pillars fans fighting back.
The fans regrouped with the assistance of many of their colleagues, who could not gain entry into the stadium for the match earlier, to attack the security men.
They went on the rampage, destroying billboards, pitch panels, posters and all others objects within sight.
The use of teargas however put them under control, as they were chased out by the teargas and a reinforcement of the security personnel.

However, thousands of spectators who had turned out in their large numbers left the stadium in tears.
Presentation of medals and trophies later took place in a stadium that was by now near-empty stadium after calm had returned to the venue.
It was a sharp contrast to the massive crowd which turned out for the game.