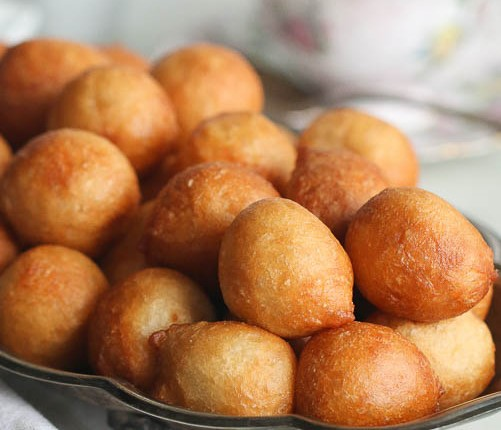 The Dangote Flour Mill has broken the Guinness Book of Records for the World’s Largest Puff-Puff pyramid, as it fried two metric tonnes  of flour to celebrate the 2018 World Puff-Puff Day on 27 October.
Anthony Chiejina, Group Head, Corporate Communication, Dangote Group, said on Sunday that the company broke the record of 200kg, which equals to four bags of flour recorded to have been fried at a location.
Puff- Puff, is a delicious “street food’’ made by deep frying flour, yeast, sugar, water, salt.
Ghanaians call it  Bofrot (togbei) , Cameroonians and Nigerians call it Puff-Puff (Puff) or beignet in French.
Chiejina said: “To beat the record, Dangote Flour at the event, fried two metric tonnes of flour, which is over 40 bags of 50kg.”
According to him, to celebrate the maiden edition of World Puff-Puff Day, over 50 confectioners engaged to produce over 30,000 pieces of the local snack, as part of activities marking the day.
He said that the event at Muri Okunola Park, in Victoria Island, Lagos had in attendance the President of Dangote Group, Aliko Dangote, and over 1,000 people, including school children drawn from various schools.
Managing Director Dangote Flour Mills, Thabo Mabe, said that World Puff-Puff Day, was an initiative of the flour miller to celebrate the confectioners who fry the delicacy, the consumers who enjoy the snack and the sellers who make a living from selling it.
Mabe said that the event was organised to celebrate Nigeria’s creativity in the local delicacy, as well as further create awareness for the company’s 1.5kg size flour launched in March.
The Executive Director, Dangote Flour Mills, Halima Aliko-Dangote, said that following the success of the maiden edition, the company decided to celebrate the World Puff Puff day on October 27.
She said: “This is giving back to the community. Through this event, we have been able to empower the confectioners and all the puff puff fried in relation to this program are given out free to feed the community.”
She said that the 2019 edition would be in collaboration with other flour manufacturers in the country to further enlighten Nigerians on the various ways to use flour, as well as its nutritional value.
Funmi Bolarinwa, Group Marketing Executive, Dangote Flour, said through the programme, it was identified that over 4,000 people were making a living through frying puff-puff, while over 100,000 are into other pastries businesses.
She said the company experimented with various flavours including vanilla, coconut, fried chili and classic to show Nigerians different ways they could enjoy the snack.
Bolarinwa said: “We are showcasing our delicacy and also exporting one of the exciting products we love to the rest of the world.”