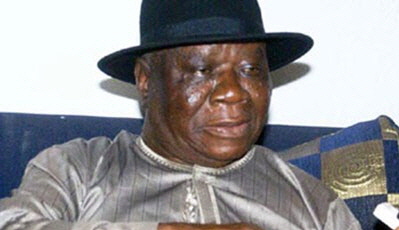 As politicians continue subtle campaign ahead of the 2015 elections, Ijaw elder, Chief Edwin Clark, has again insisted that President Goodluck Jonathan will run in 2015, saying it is only the constitution that can stop him.
According to Clark, the President must run his two terms as entrenched in the nation’s constitution, adding that the purported agreement between him and some governors to do only one term remains invalid.
The former Federal Commissioner spoke on Tuesday while hosting a delegation of Second Republic legislators in his Asokoro house in Abuja, blaming selfish politicians for heating up the polity.
According to him: “Nigeria is great.
“Only few people want to confuse this country because of their personal ambitions.
“Today is Mr. President’s turn.
“Tomorrow it will be another man’s turn.
“That is why we have the constitution.”
Chief Clark, who spoke extensively, added: “The constitution says that before you can be qualified to be a president of this country, you must have contested through elections and after the first term of four years, you can contest again for a second term of another four years.
“Thereafter, you will not be eligible again, that is the law.
“The law does not state that remain in office for one term, you can enter into agreement with some individuals that after your one term, someone else will come in.
“That will be illegal.
“Such an agreement will be null and void, unconstitutional.
“Nobody can change the constitution of Nigeria, that is the 1999 Constitution of the Federal Republic of Nigeria.
“Even though people are saying that it is imperfect, it is perfect until it is changed or amended.
“I think under Section 137, Mr. President is entitled to two terms, that is of eight years, and as a former member, you recognize that in your time, Alhaji Shehu Shagari, first President of the Second Republic, Federal Republic of Nigeria, was elected president of this country in 1979 and he remained in office until 1983 when we sat down again at the convention and re-elected him.
“You were all there and that was the time all of you left but that was the time some of us were elected as senators but for the military ambition, some of them here said it is time for us military to rule so they overthrew our government in December 1983.
“We woke up and they said we are no longer in office, otherwise Alhaji Shehu Shagari should have remained in office until the end of his second term.
“Then, (former President Olusegun) Obasanjo was elected the president of this country in 1999.
“In 2003, he re-contested in accordance with the provision of the Nigerian constitution for another four years even though his deputy was trying to overthrow him, he couldn’t succeed because of the constitution.
“Nigeria said come back again for another four years.
“It was when he wanted to go beyond what the constitution provided then Nigerians said enough is enough.
“Nigeria is a great country.
“We have no other country to go to and if today all of us believe in one country and that whoever is the president of this country or whoever that pleases God to appoint as the highest person in the country, we have the duty to support him and that is what we have come to do.
“So I am appealing to all Nigerians that this country is very large, everybody should be able to become what he wants to be if he is competent and qualified irrespective of where he comes from.
“So today, I see Kano man, Sokoto, Ekiti and other places coming to say that Mr. President is entitled to two terms.”
The delegation, led by Umar Karato Lawal, pledged their support for President Goodluck Jonathan should he decide to run for a second term.