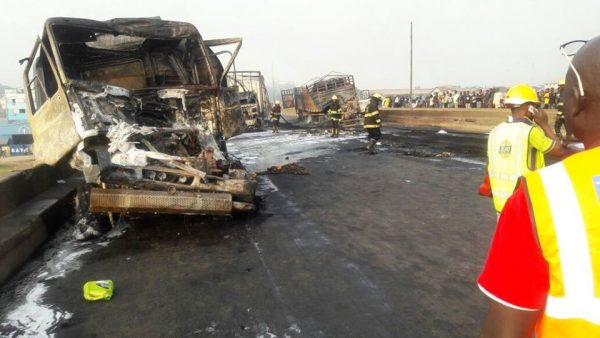 Share
Facebook Twitter LinkedIn Pinterest Email
No fewer than 191 people have lost their lives in 294 road crashes in parts of Kogi from January to October this year.
Suleiman Mohammed, the Head of Operations of the Kogi State Sector Command of the Federal Road Safety Corps, made the disclosure on Tuesday in Lokoja.
The Okene-Lokoja-Abuja highway is listed among the accident-prone highways in Nigeria.
Mohammed was speaking on activities lined up to commemorate the 2017 African Road Safety Day and World Remembrance Week for Road Traffic Victims.
He said that 1,251 people sustained injuries in the road crashes while 1,569 were rescued unhurt by the FRSC in the accidents.
According to Mohammed, over-loading, over-speeding, making calls while driving, drunk-driving and poor conditions of vehicles are the major causes of the accidents.
The FRSC chief said, however, that the number of deaths and injuries recorded this year was lower than what was recorded in previous years, calling on motorists to join hands with the FRSC to reduce carnage on the roads.
On the problem of over-loading by motorists plying roads in the state, he said that the RFSC was working with relevant organisations to tackle the problem.
Mohammed said that the command had scaled up enforcement and public enlightenment activities to reduce carnage on the roads.
He announced that the command would stage a mega- rally at the popular Ibro Park in Lokoja on November 15 to sensitise the public on road crashes.
Mohammed said that top officials of the FRSC would visit victims of road accidents in various hospitals in Lokoja to sympathise with them.
He said that special prayers would be held for road users and victims of road crashes in mosques and churches on November 17 and November 19.
Federal Roads Safety Corps Kogi State Suleiman Mohammed
Share. Facebook Twitter Pinterest LinkedIn Tumblr Email