by The Eagle Online
in Featured, News
3 min read
1

One of the three model schools awarded for construction by the immediate past Administration in Oyo State, headed by late Governor Abiola Ajimobi, Oba Akinbiyi High School, Oremeji, Ibadan, has fallen apart 17 months after it was commissioned.

The model school, in the heart of the state capital, was one of the three awarded to an Abuja-based contractor, Sammya Nigeria Limited, for N1.866 billion, but later re-awarded through Direct Labour for completion at N402 billion, The Eagle Online was told.

While two of the schools are in Ibadan, further information available to The Eagle Online said the other was located in Shaki area of the state.

Though records were not available as at press time to confirm if the contractor, with office address as 1, Adobe Crescent, Wuse 2, Abuja, was mobilised at all or what percentage of the contract sum was paid as mobilisation fee, the information available was that it was awarded in 2014 for six schools.

However by 2016 when it was discovered that the contract was not going as scheduled, a decision was taken to reduce the number of schools to three and to do it via Direct Labour, with the Ministry of Works in charge, The Eagle Online was told.

The sum of N402 million was voted for this purpose and the number of beneficiary schools reduced from six to three.

According to available information, the model school at Oba Akinbiyi was one of the projects commissioned in the twilight of the Ajimobi Administration in May 2019.

The cost of the project, The Eagle Online was told, did not include furnishing.

Students provide their own tables and chairs.

However, following complaints that the school was now a danger to both staff and students, with none able to use any of the 57 toilets in the building for lack of water, the Oyo State Governor, Engr. Seyi Makinde, on Monday paid an unscheduled assessment visit to Oba Akinbiyi High School to physically assess the structural challenges reported to be troubling educational activities in the school.

A statement by Taiwo Adisa, the Chief Press Secretary to Makinde, indicated that the governor asked state officials to investigate the reason behind the immediate past administration’s termination of the contract for the school building and the subsequent approval for its execution by Direct Labour at the cost of N400 Million.

The statement maintained that the visit became important following reports that the building has structural challenges and that staffers and students could not feel at ease inside the structure completed only a year and some months ago.

While speaking after a brief tour of the building, Governor Makinde declared that his administration would not watch while the lives of teachers and students are endangered.

He noted that though the school was only commissioned a few days before the expiration of the tenure of the last administration, the building was no longer functional, with the teachers and students said to no longer feel safe inside it.

The governor said: “In the file that came to me, this place was commissioned the week that I took over, 29th of May, 2019, a year plus ago.

“You can see it out there.

“Even the Oba Akinbiyi they wrote (the signboard) there, is falling off.

“If you go inside, the tiles are broken.

“The structural integrity of the entire building is doubtful, and we have teachers and students in there.

“We don’t want the building to collapse on anybody.

“The borehole is not working.

“According to the principal, they have 57 toilets in here, but the students still go to the bush to do stuff.

“From the report that came to me, the contract was terminated from the original contractor and over N400 million was released by the government to complete it through direct labour.

“So, I believe they will have to make some explanations as to why, first, the contract was terminated; second, why N400 million was spent and the tiles, the doors, everything are basically broken.”

Governor Makinde pledged to investigate the structural challenges in the building, stating that anyone found culpable would be made to face the wrath of the law.

He asked the Auditor-General and the Ministry of Works to investigate the situation further and get back to him.

He said: “If, in one year, this whole thing is fallen into pieces, and people build their own houses and expect to live there for at least 25 years, this is obviously not acceptable to us. 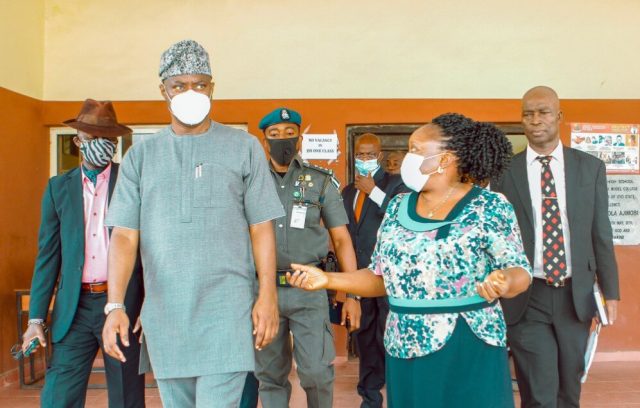