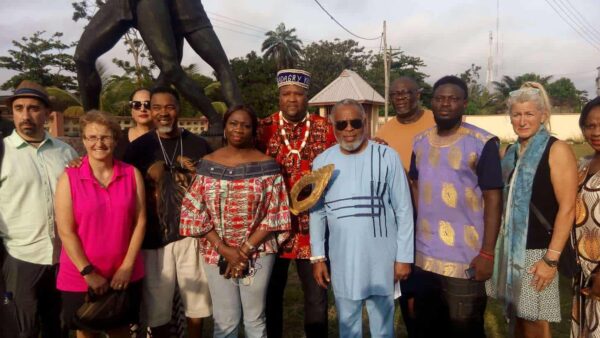 The Federal Government says a Diaspora Palace estimated to gulp about $15 million will be built in Badagry, Lagos State for those in Diaspora to relax when they come on visit to the coastal city.
The Senior Special Assistant to President Muhammadu Buhari on Diaspora and Foreign Affairs, Abike Dabiri-Erewa, made this known on Saturday at the 2019 Diaspora Festival in Badagry.
Dabiri-Erewa, also the Chairman, Nigerians in Diaspora Commission, said Dr. David Anderson, a Pastor and Leader of American delegation, had promised to invest between $10 million to $15 million in the project.
The News Agency of Nigeria reports that the Badagry Diaspora Festival is to celebrate the identity, culture, history, heritage and tradition of people of African descendants.
The festival was jointly organised by the Door of Return Initiative Nigeria and office of the Senior Special Assistant to the President on Diaspora and Foreign Affairs.
Dabiri-Erewa said: “The idea is to build a Diaspora palace where those in the diaspora will come and relax and feel the continent.
“It will serve as a symbolic place for the delegation of Diasporas and everybody.”
The presidential aide said the Akran of Badagry, Aholu Menu-Toyi 1, had already approved 10 acres of land for the building of the palace, when Anderson and his team visited the monarch in 2018.
Dabiri-Arewa, leading a delegation of Diasporas to the Gerefu Island’s Point of No Return, decried the pains and agonies forefathers went through during the era of slave trade.
According to her, it is a pity that Africans went through such pains, but they should get out of that and go on and develop.
She added: “The only way we can do it is by working with any African wherever they maybe.
“This is history, and this is irreplaceable; it needs to be tapped and that is what we have been working for to ensure that we get there.
“They came all the way from various parts of the world. It is just amazing what we have here.
“You know that African continent and Nigerian will lead the way to ensure that Africa is truly the giant of the world. The future is here.
“I am happy the Diasporas are coming here, and when they come, they are being led to what they can do in Africa, particularly here in Nigeria.
“Africa is a land of opportunities. It is a virgin land waiting to be tapped.”
Dabiri-Arewa said it was a lifetime experience and also an experience which everybody should have.
She said: “We have come now to the Point of No Return. We have opened the door of return and you know it is a symbolic door.
“The door to prosperity, freedom and joy. So that is what we are doing. We are a blessed nation.”
The commission chairman said the Federal Government would work with the Lagos State Government and other non-governmental organisations to see the best they could do to project the country.
Speaking, Solomon Bonus, the Special Adviser to Governor Babajide Sanwo-Olu of Lagos State, said the festival had moved the state to the next level.
Bonus said he had engaged some of the delegates and they were ready to invest in Badagry.
He said they were using the festival to project the state to the world through Arts and Culture.
Anderson had indicated his readiness to invest over $15 million in the Diasporas Palace project.
According to him: “The monarch gave us 10 acres of land last year when I came with 18 delegates; it will cost over $15 million to build the palace, which will be in form of an hotel.
“It depends on multiple factors, including your own government and construction of the roads.
“There is environmental studies that need to be done and feasibility studies also; so, we need to get started on those ones first.
“Once it is done, then, we will move further. There is a lot of work that needs to be done.”
Anderson commended the people of Badagry for their warm reception, describing coastal town as the Diasporas’ second home.
NAN reports that the American delegation had earlier visited the Akran Palace, where they were given new names in accordance with the traditional naming ceremony.
The American delegation also visited heritage sights, including the first Christian Cemetery in Nigeria, Badagry Heritage Museum and a First Storey Building in Nigeria.
Others were Mobee Family Slave Relics Museum; Seriki Abass Brazilian Baracoon; the Agia Tree Monument, where Christianity was first preached in Nigeria; and the tomb of Huntokonu, the first slave merchant.