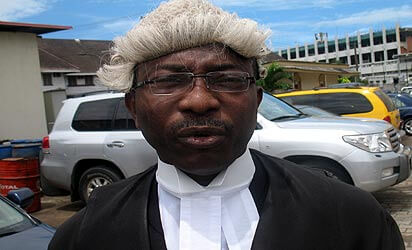 A Senior Advocate of Nigeria, Chief Afe Babalola, has asked the Independent Corrupt Practices and other related offences Commission to investigate a former Solicitor-General of Lagos State, Lawal Pedro, for allegedly defrauding his law firm of $10 million in professional fees.
Babalola asked the ICPC to investigate how the family of Gbadamosi Eletu of Osapa Village, Lagos substituted his law firm for that of Pedro, thereby depriving his firm of $10 million professional fees.
He made the request in a petition he addressed to the Chairman of ICPC, Ekpo Nta, detailing how the former solicitor-general allegedly abused his office and hijacked the briefs he handled for the family of Eletu in the Supreme Court while his professional fees had not been paid.
As contained in the petition, the SAN asked the ICPC to investigate the corrupt practices in respect of the settlement of some lawsuits, which Pedro concluded in connivance with the Eletu family and other parties “to defraud his law firm of its professional fees”.
He said the Remedium Chambers “is the private law firm, which Pedro used fraudulently to hijack the briefs of other lawyers while he was in the employment of Lagos State Government”.
Babalola alleged that Pedro used his private law firm to hijack the negotiation of Suit No: LD/4897/2014 between Beach Resorts and the Eletu family.
As a result, the Eletu family deprived the law firm of Afe Babalola of its professional fees of $10 million.
He buttressed his claims in a Suit No: LD/1827/LMW/15 he recently filed in at a Lagos High Court contending that after his retirement, Pedro moved “to the premises of De Remedium Chambers located at No. 2 Akintoye Shogunle Street, Off John Olugbemi Street, Ikeja where practices law privately. He has since changed the name of the said office to Lawal Pedro, SAN and Co”.
The senior advocate provided insight into the genesis, explaining how the Eletu family approached his law firm through a lawyer, Ademola Koko, in 2005 asking him to appeal against the decision of a Court of Appeal involving 254 hectares of land.
After he agreed to handle the appeal at the Supreme Court, Babalola asked the Eletu family for a professional fee of $20 million, which he said was reduced to $10 million after the family pleaded.
But when asked to pay part of the professional fees, the senior advocate noted that the Eletu family offered “to give him land to cover the payment”, which he said was rejected in favour of a cash payment of fees.
Upon agreement, Babalola requested an agreement on his professional fees to be in writing and that the agreement should be executed before a magistrate, which the family complied with as proof of good faith.
He added that his law firm prosecuted the appeal for eight years before the Supreme Court delivered judgment on July 12, 2013 and awarded 216.7 hectares of land in favour of the Eletu family.
He said the attempt by his law firm to pursue the execution of the Supreme Court judgment stoked diverse litigations and protests, which perhaps compelled the Lagos State Government to intervene in the dispute.
Bablola alleged that all the suits filed after the judgment of the Supreme Court were fraudulently settled without his knowledge and cited the suits filed by Wole Olanipekun & Co on behalf of Lekki Silver Touch Limited; Dele Farotimi & Co on behalf of Sun City Properties Limited; Olalekan Yusuf on behalf of UACN Properties Development Company; and Joseph Nwobike & Co on behalf of Beach Resorts Nigeria Plc.
He noted that the suits, which arose from the decision of the Supreme Court secured by his law Ffm for the Eletu family, were settled without his knowledge and with the involvement of Pedro, who allegedly used his private firm.