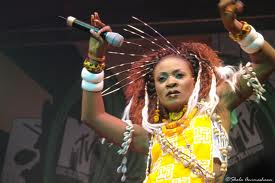 Gift Uwame, better known as Muma Gee, is said to be expecting her first child with her husband, Prince Eke.
The Port Harcourt, Rivers State-based singer confirmed the good news on Saturday.
The 40 something-year-old singer, who had several breakup before Prince Eke came to her life, said: “Is there anything wrong fulfilling the essence of my womanhood?
It’s a special feeling, I must tell you.”
Muma Gee, who is more popular and well connected in the South South zone of the country, is one of the richest female acts in Nigeria but has not been lucky enough in getting a life partner.
Her hit album, Kaade, is still selling fast in the market, while the video has become a must watch clip for every household.