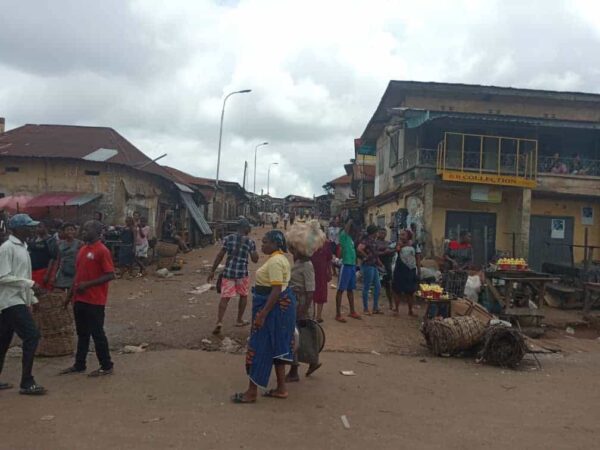 At least two persons were feared dead with over five others hospitalised following a clash between Ebonyi State Government officials and traders at Abakpa Main Market, Abakaliki on Wednesday.
The clash led to the closure of shops by the traders, while the Police barricaded all entrances to the market, making some arrests.
Buyers and sellers were seen scampering for safety as the Police fired teargas canisters.
One of the traders who spoke to our correspondent on condition of anonymity said the market was invaded in the morning by thugs who came with some government officials and started sealing some shops in the market for allegedly refusing to pay revenue to government.
The government officials involved were the Commissioner for Border Peace and Internal Security, Stanley Emegha; Special Assistant to Governor David Umahi on Internally Generated revenue, Martins Okwuegbu; and the SA on Market Development, Kyrian Ofoke, among others.
The action of the officials were resisted by some traders, resulting to a clash, during which the traders were manhandled by the thugs.
A source said: “The thugs hit a trader on the head with plank and he became unconscious and later died.
“We have received news that one among those rushed to the hospital had also died.
“The Police came and started shooting teargas, blocking everywhere and we had to shut our shops and run for safety.”
The traders maintained that the action of government was targeted at making them relocate to the new International Market at all cost, alleging that it had nothing to do with refusal to pay revenue.
They also alleged that the shops that were sealed belonged to those who endorsed a Court petition against government’s eviction notice.
Recall that the government had few weeks back suspended the Chairman of the market, Christopher Eze, over alleged financial misappropriation, and inaugurated a new leadership led by Governor Umahi’s former SA on Transport, Peter Obah.
The traders then had also protested the development, alleging that the suspension was done in bad faith as his chairman’s tenure had not elapsed.
Information later filtered in that the traders petitioned the Court against government’s relocation order and imposition of leadership.
Meanwhile, Emegha and Okwuegbu, while reacting, debunked the allegations, insisting that the shops were sealed for the refusal of their owners to pay revenue to government.
Emegha also added that some of the sealed shops were identified as hiding places for hoodlums who rob traders intermittently in the market, adding that those who refused to pay government revenue were also instigating others not to comply.
They denied knowledge of any casualty in the clash, adding that the Police had waded in to restore order in the market.
Emegha, who further maintained that traders movement to the International Market was sacrosanct, however, added that the shops would fully be ready by the second week of September.
He explained that the traders would be moved in batches at such appropriate time, insisting that the imbroglio had nothing to do with the relocation order.
The Police Public Relations Officer in the State, DSP Loveth Odah, confirmed the incident, adding that only one person was reportedly beaten to unconsciousness.
Odah said she had put a call across to the concerned governor’s aides who said they only went to the market to enforce revenue collection when some traders attacked the task force.
Odah, however, blamed the officials for not notifying or involving the Police from the onset of the drive so as to have prevented the breakdown of law and order.
She maintained that Police investigations were on to ascertain both the remote and immediate cause of the crises.
She said: “I called the Internal Security Commissioner to know what is happening, and he said he learnt it was due to disagreement between the traders and the Internal Revenue people: the sellers’ refusal to pay IGR that has resulted to the clash this morning.
“When I spoke with the IGR SA to the Governor, he actually said that they refused to pay and his workers went to the market to seal.
“He said that was their process of punishing those who refused to pay revenue.
“I was trying to get information from them if that should be the legal action to be taken if one refuses to pay revenue and the Internal Revenue SA to the governor said he would get back to me.
“I should think that if anybody refuses to pay house rent or IGR, there should be a process: if the police is not there, it should be the Court.
“I want to beg you that you just hold on.
“Maybe, before the day runs out we would be able to know what has happened there.”