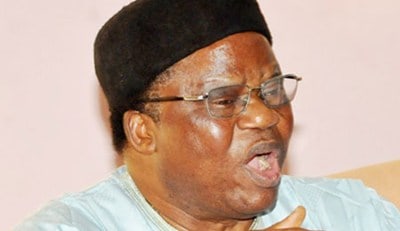 A former Minister of Information, Prince Tony Momoh, has expressed fears that the new N30,000 minimum wage, signed into law by President Muhammadu Buhari on April 18, would lead to chaos.
Momoh, who is also a chieftain of the All Progressives Congress, made the statement while addressing newsmen on Friday in Abuja as part of activities to mark his 80th birthday.
Acccording to him, while he is happy over the new wage, he holds the view that it will lead to a situation where many states will not be able to pay and this will lead to industrial unrest and strikes.
He said: “Minimum wage is not a living wage.
“My prediction is that the N30,000 minimum wage will cause chaos because many state governments that were paying N7,500 before N18,000 was introduced could not pay then.
“A lot of them are currently finding it difficult to pay N18,000 now.
“They are already saying they can’t pay and this will lead to strikes.
“When that happens, the nation is in trouble.
“The N30,000 minimum wage is not a living wage.
“What is the percentage of the workers in Nigeria that are entitled to the N30,000 minimum wage?
“What is the percentage of the public servants compared to the percentage of the entire working population in Nigeria?”
Momoh, who is also a lawyer, equally spoke on the pronouncement the Code of Conduct Tribunal on the former Chief Justice of Nigeria, Justice Walter Onnoghen.
He said that the argument of some lawyers that Onnoghen shouldn’t have been taken to the CCT was not tenable, arguing that such lawyers didn’t know what they were talking about.
He said: “I don’t believe that it is a case of witch-hunt.
“I advised him (Onnoghen) to resign when the case started.
“That would have saved him from the embarrassment.”
Momoh said the CCT and the Code of Conduct Bureau, established by part one of the fifth schedule of the constitution, had powers to deal with sitting presidents and governors.
He said: “Part two deals with those who are subjected to its jurisdiction, which is the President, Vice-President, CJN, down to councillors.
“The CCT is a disciplinary body.
“Onnoghen is a public servant before he became the CJN.
“His case was directed to the Code of Conduct Bureau, which transferred it to CCT.”
Also speaking on the permutation about the composition of the leadership position for the 9th National Assembly, Momoh said the reliance of the APC on party supremacy to impose its candidates would not work.
He said claims of party supremacy could only be effective in a parliamentary not presidential system of government because the political party with the majority would always form the government in the former.
Momoh recalled that since 1999, efforts by political parties to impose their candidates on the nation’s parliament had always been resisted by federal lawmakers.
He added that the National Assembly had its own personality that it always protected in spite of political party differences, adding that party’s choice could only succeed if there was cooperation and not by imposition.
He said: “In 1999, Evans Enwerem was not the choice of the senators.
“They wanted Chuba Okadigbo.
“So, Enwerem did not last when he emerged.
“Also in 2015, the party wanted Femi Gbajabiamila, but Yakubu Dogara got it.
“Since 1999, there have always been problems between the legislators and the party’s candidates.
“The legislators come together to pursue common interests and party supremacy is obviously not one of them.
“In the parliamentary system, the party with the majority will dominate leadership positions in the parliament.
“The prime minister is also a member of the parliament.”
The former minister also stressed the need for restructuring of Nigeria as a way of ensuring good governance in the country, arguing that Nigeria was too top heavy in administering governance.
Momoh said that the country needed to decongest the political space, adding that the National Assembly made law in 93 areas comprising the exclusive and concurrence lists.
He said: “In federations worldwide, we don’t need more than 18.
“The rest should go to regions.
“They know what to do with it.
“The Senate will become the only lawmaking arm of the federation, while the House of Representatives should go to the regions and be making laws for their people.
“When this happens, economic deregulation is automatic because everybody will contribute to run the centre.”
Momoh advised media practitioners to acquire necessary knowledge from the constitution of the country for them to effectively perform their roles as watchdogs to government and to enlighten the citizens.