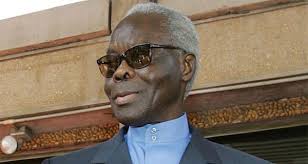 President Muhammadu Buhari said on Thursday in Cotonou that late President Mathieu Kerekou of Benin Republic will be long remembered and honoured as “a father of his nation and founding father of the Economic Community of West African States”.
Speaking on behalf of other African leaders as the official funeral rites of the late President began with tributes in his honour at the Stade de L’amitie, President Buhari described him as a beloved leader of his people and an ardent advocate of international cooperation who will be greatly missed within and outside his country.
He said: “On behalf of my colleagues, fellow presidents and leaders of our continent of Africa, I rise today, to speak in honour of a departed African statesman, a father of his nation, indeed a founding father of ECOWAS.​
“General Mathieu Kerekou was a great defender,  fervent lover and pursuer of international peace, solidarity and security.
“We recall that in pursuance of his commitment to peace, stability and progress in his country, General Kerekou voluntarily established the political framework for the return of Benin Republic to democratic governance in the 1990s.
“His two democratic mandates from 1996 to 2006 underscored the ardent love his people had for him as a great leader and that period witnessed great democratic freedom that continues to exist today, as the foundation for lasting peace and stability in Benin Republic.”
Buhari urged the late President’s wife, Margaret Kerekou, members of his family, President Boni Yayi and the people of Benin Republic to be consoled by the belief that having lived a very fulfilled life in the service of his country, General Kerekou has gone to a well deserved rest from his earthly labours.
President Buhari was accompanied to the event by the Minister of Foreign Affairs, Geoffrey Onyeama.
The Presidents of Togo and Niger Republic were also present at the occasion.

Faces at wedding of Babangida’s daughter as Tinubu, Jonathan sit side by side