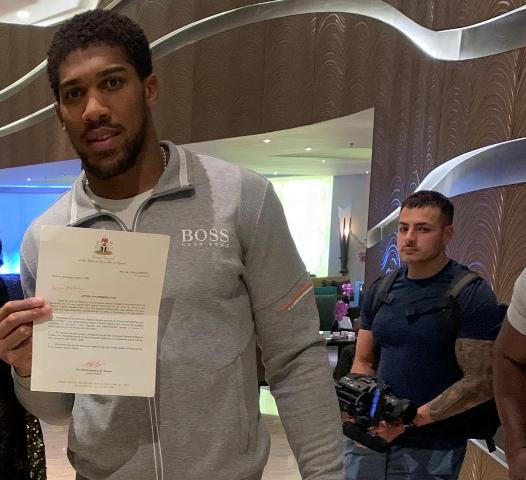 World heavyweight boxing champion, Anthony Joshua, has expressed appreciation to the Consul General of Nigeria in New York, Benaoyagha Okoyen, for psyching him up to reclaim his titles.
After Joshua lost to Andy Ruiz Jr during their first match in New York in June, Okoyen sent him a letter praising his courage and assuring him of Nigeria’s support in his future fights.
In the four-paragraph letter, the envoy assured him that Nigeria remained proud of the “remarkable feat’’ he had attained in his boxing career.
The letter obviously meant a lot to the 30-year-old Nigerian-British pugilist, who held it up in a photograph obtained by the News Agency of Nigeria.
After reclaiming the titles in Saudi Arabia on Saturday, he reciprocated with words of appreciation to the Consul General.
Joshua’s message was conveyed by a US-based Nigerian journalist, Joi John, who covered the rematch in Saudi Arabia.
The two-time heavyweight boxing champion was quoted as saying that the letter was a big source of inspiration to him at a time he needed it most.
“To Ben. God bless,” Joshua wrote on an autographed copy of the official fight brochure at the Diriyah Arena which he sent to the envoy.
Born in the UK to Nigerian parents, Anthony Oluwafemi Joshua has always identified with his Nigerian heritage.
Moments after defeating Andy Ruiz Jr, he did a video message thanking Nigerians for their support.
The boxer will be visiting Nigeria to present his IBF, WBA, and WBO world heavyweight boxing titles to President Muhammadu Buhari, according to the Minister of Sports, Sunday Dare.
Joshua has also reportedly revealed his desire to defend his world heavyweight title belts one day in Nigeria.